Last night we were left in the small cell the hooman had used to incarcerate us after the ‘slave-market’ as I like to think of it. That said the cell seemed to have rather ambient lighting and some cool grooves. I think I saw an album cover of Himi Jendrix that well known sitar player sitting around when I looked through the slats of the cage. There was also a rocket-shaped light thing with lava erupting out. Thought we were all going to be incinerated as well as incarcerated, but fortunately it seemed a very localised eruption.

After being left to stew in our own thoughts for a while (obviously been watching too much Brooklyn 99) the Hooman allowed us out to explore what I can only describe as a covered yard, with soft woolly grass-like stuff on the floor. I dashed around to as many corners as possible to make sure I had first dibs on them all, but Chili beat me to at least one. Although that particular one was weird as the wall moved inwards at one point smearing Chili’s message all over the woolly stuff in a thin layer like marmite. Hooman appeared from behind the moving wall and got really excited about sommat. Must REALLY like marmite.

After this little episode I realised what we had been held in up until now must having been a holding cell as we were now ferret-marched to a much larger (but still heavily secured) cage where we were dumped, the door was locked and the hooman sat down to watch us. Think I should have started charging for Ferret TV. Clearly the hooman has a low attention span as it (possibly a She, possibly an It) soon got sick of watching my chest rise and fall as I slept soundly on the rather thoughtfully provided soft brown mattress.

Woke up this morning after a surprisingly good night’s sleep. The surprise was that what I had taken for a furry mattress, was in fact some sort of animal. Who knew?! It got very upset with much huffing and puffing when I finally woke up (dreamed I was sleeping on a water bed) and rolled off. Turns out this joker reckons he’s some sort of celebrity. Comedian I’d say. A Hangora Sninaman apparently. Or at least I thought that’s what he said, but it might have been Angora Cinnamon. Don’t know. Don’t care.

Thus followed me and Chili getting hoisted unceremoniously out of our hammocks one after the other and being stared at, with the hooman muttering sommat about facial recognition and twin teenage boys. Can’t say I saw even one hooman childling in the prison compound mind, let alone two. Oh and don’t get me started on the shave!

Apparently you get a short back and sides when locked up? Chili got nothing of the kind and I just got a short tail! How’s that for crap couture? Turns out all that was trimmed was the very end of my tail so now I go about looking like I’ve got a built-in broom at the end of my body! Apparently it is to ‘tell us apart’. Just look at us will you? We look nothing alike! I’m the handsome one and Chili just looks vacant all the time (I got the brains and looks and he got, well, nothing very much).

So after all this, what I can only describe as humiliation and mutilation, we get locked back up, and just as I think our mattresses are being taken out for a shake, I realise it’s that blinking Hangora thing being taken out, after which the hooman seems to lock him in some sort of strangle hold.

Well colour me salty and call me a turnip if I can’t now see what kind of animal this fluffed-up idiot is!!! Only ANOTHER FERRET?! Not only another ferret but a brown, preened, floof-ball with flowing locks of fur, a large water-bed style belly (explains a lot) and a very self-congratulatory look in his eye as the human starts to cuddle and kiss him. Eeewwwww.

Anyhow, to my satisfaction the hooman soon tires of this display of what I think of as torture, but which the Floof-ball seemed to be enjoying. The hooman then takes him away and I sadden that that is probably the last time we will ever see him again. He really did make a good mattress.

After a while I fall asleep only to be woken by the sound of snuffling outside the cage. I decide it must be a large dog on guard to make sure we tow the line. I crack open an eye to see instead that the Brown One has escaped the hooman’s clutches and is (weirdly) waiting for the guard to let him back in to our cell.

Clearly the Brown Floofball has another thing in common with a mattress. No brain cells. 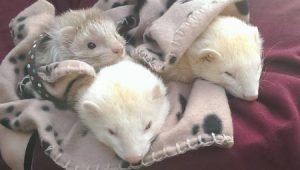